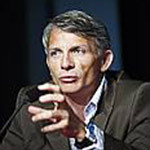 Director and founder of the French Centre for Intelligence Studies – Paris

Eric Denécé, 48 years old, is the Director and founder of the French Centre for Intelligence Studies (CF2R).
During his career, he previously served as :
-­ Naval Intelligence Officer (analyst) within the Strategic Evaluation Division at the Secretariat Général de la Défense Nationale (SGDN),
-­ Sales Export Engineer of Matra Defense,
-­ Director for Corporate Communications of NAVFCO (French Naval Defence Industry Advisory Group),
– Founder and Managing Director of Argos Engineering and Consulting Ltd, a Competitive Intelligence consulting company.
His operational experience, whether as an officer or as a consultant, led him to conduct operations in Cambodia among guerrilla forces, and in Myanmar to secure Total’s interests against the local guerrilla.
He also served as a consultant to the French Ministry of Defence on projects concerning the future of the French Special Forces and South China Sea’s disputes. For years, he has served French and European companies on intelligence, counter-­‐intelligence, information
operations and risk management issues, in Europe and Asia.
Eric Denécé earned a PhD in Political Science (Sorbonne).
He lectures on intelligence for the Ecole Nationale d’Administration, the National Defence College, the Air Force College and the Military School for Overseas and Foreign Assignments. He has been Visiting Professor at Bordeaux IV-­‐Montesquieu University where he has created the sole French diploma of Intelligence Studies. He also teaches Competitive Intelligence in Bordeaux Business School and in Beirut Notre-­‐Dame University (Lebanon).
Eric Denécé has published eighteen books, more than 170 articles and 30 research projects in Geopolitics, Intelligence and on Special Forces, for which he was more specifically awarded the 2009 Akropolis Prize (Institute for Homeland Security Studies) and the 1996 Foundation for Defence Studies’ Prize.
He is also the Director and Founder of the review Renseignement et opérations spéciales as well as of the collection Culture du Renseignement (L’Harmattan publisher).
He is regularly consulted by the French and international media on terrorism and intelligence issues, and has intervened in more than 1000 radio and 350 TV shows.
Eric Denécé is the Chairman of the Ethical Committee for the Spyland Project, an amusement park dedicated to the world of intelligence, in France, that is to open in 2015.