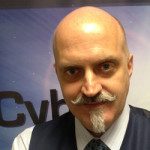 Jason Healey is the director of the Cyber Statecraft Initiative of the Atlantic Council, focusing on international cooperation, competition and conflict in cyberspace. He edited the first-ever history of cyber conflict, A Fierce Domain: Cyber Conflict, 1986 to 2012 and co-authored the book Cyber Security Policy Guidebook by Wiley.

His ideas on cyber topics have been widely published in over a hundred articles and essays published by the Atlantic Council, National Research Council; academic journals such as from Brown and Georgetown Universities; the Aspen Strategy Group and other think tanks. His book, A Fierce Domain, was reviewed favorably in the Economist and by numerous government leaders, including the President of Estonia and former head of the CIA and NSA. He is the only person to be both a White House director of cyber policy and review board member for the DEF CON global hacker conference. Jason is also president of the Cyber Conflict Studies Association, lecturer in cyber policy at Georgetown University, and lecturer in cyber national security studies at Johns Hopkins School of Advanced International Studies.

Jason has unique experience working issues of cyber conflict and security spanning fifteen years across the public and private sectors. As Director for Cyber Infrastructure Protection at the White House from 2003 to 2005, he helped advise the President and coordinated US efforts to secure US cyberspace and critical infrastructure. He has worked twice for Goldman Sachs, first to anchor their team for responding to cyber attacks and later, as an executive director in Hong Kong to manage Asia-wide business continuity and create the bank’s regional crisis management capabilities to respond to earthquakes, tsunamis, or terrorist attacks. Immediately after the 9/11 attacks, his efforts as vice chairman of the Financial Services Information Sharing and Analysis Center created bonds between the finance sector and government that remain strong today.