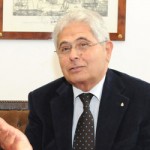 Admiral Marcello De Donno was born in Lecce February 7, 1941 attended regular courses at the Naval Academy of Livorno from 1959 to 1963, graduating with the rank of Ensign. He specialized in Combat Information Operation Service, operations warfare and subsequently attended the Italian Naval War College. During his career, he was appointed Commander of the Corvette “AQUILA”, executive officer of the cruiser “Vittorio Veneto”, Commander of the Frigate “SAGITTARIO”, Commander of the cruiser “Andrea Doria”. He ‘was also the Naval Attaché at the Italian Embassy in Washington, Chief of the Third Division – Employment Officers at the Directorate General for Military Personnel of the Navy, Assistant Chief of Staff of the Navy and later, with the rank of Rear Admiral, Commander of the Naval Academy in Livorno. As Rear Admiral he served in leadership position at the inspectorate of the Navy Schools and later at the General Office of the Chief of Defense Staff and the Financial Planning Office of the Navy.

Promoted Vice Admiral on July 5th 1997, he served as Deputy Chief of Staff of the Navy and then as Commander in Chief of the Fleet from October1999.
From February 16th 2001 till February 7th 2004 was the Chief of Staff of the Navy. Since July 2004 he is the Chairman of the board of the Company Agusta Westland Spa. In July 2005 he constituted the non-profit association Nyumbani Italy in support of the projects of the Nyumbani Kenya Foundation in Nairobi, with the aim to help and assist children and orphans affected by AIDS.