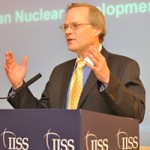 Mr. Fitzpatrick’s research focus includes nuclear proliferation concerns and preventing nuclear danger in the emerging ‘nuclear renaissance’. He is the author of The Iranian Nuclear Crisis: Avoiding worst-case outcomes (IISS Adelphi Paper 398, 2008) and has written articles on non-proliferation in the Financial Times, International Herald Tribune, Survival, and other publications. He was the editor and principal author of the IISS Strategic Dossiers on Preventing Nuclear Dangers in Southeast Asia and Australasia, published in September 2009, Nuclear Programmes in the Middle East: in the shadow of Iran, published in May 2008, and Nuclear Black Markets: Pakistan, A.Q. Khan and the rises of proliferation networks – A net assessment, published in May 2007. He has lectured throughout Europe, North America and Asia and is a frequent commentator on proliferation and disarmament topics on BBC, NPR and other news outlets. Mr Fitzpatrick came to IISS in 2005 after a distinguished 26-year career in the US Department of State, where for the previous ten years he focused on non-proliferation issues. In his last posting, he served as Deputy Assistant Secretary for Non-proliferation (acting), responsible for policies to address the proliferation problems posed by Iran, North Korea, Libya, Iraq, South Asia and other regions of concern. Among his duties, he also oversaw implementation of the Proliferation Security Initiative, advanced conventional arms and technology controls, proliferation sanctions, and export control cooperation programs.

Mr Fitzpatrick had previously served for four years at the US Mission to International Organizations in Vienna, including as Charge d’Affairs and as Counselor for Nuclear Policy, in charge of liaison with the International Atomic Energy Agency. In previous State Department postings, he headed the South Asia Regional Affairs Office, responsible for non-proliferation and security policies regarding India and Pakistan; served as special assistant to Deputy Secretary Strobe Talbott; headed the Political-Military Branch of the US Embassy in Tokyo; served as North Korea desk officer; and held postings in South Korea and New Zealand.

Mr Fitzpatrick received a Master in Public Policy from the Kennedy School of Government at Harvard University, and joined officers of the Japanese Self Defense Forces in a one-year post-graduate study program at the Japanese National Institute of Defense, where his dissertation on Korean unification was published in journals in Japan and South Korea. Expertise: Non-proliferation and disarmament; Northeast Asia, South Asia and Iran; International Atomic Energy Agency; US foreign policy; Nuclear energy.